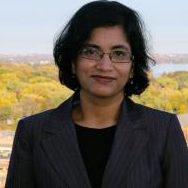 Our lab focuses on how neural stem cells generate myelin in the brain during development as well as during recovery from a demyelinating insult i.e. remyelination. Our primary goal is to understand the disease process and identify factors that can help neural stem cells repair the brains with myelin abnormalities, including Down Syndrome and Multiple Sclerosis.

The myelin sheath is a specialized membrane synthesized by oligodendrocytes, which wraps around the axons of neurons in the vertebrate brain. In demyelinating diseases, disruption of myelin results in severe neurological defects due to conduction block ultimately leading to the loss of axons. The goal in inherited myelin diseases is to myelinate axons that have not been ensheathed; while in demyelinating diseases, the goal is to ensheath the axons that have lost their myelin. Our objective is to understand the molecular underpinnings of signaling pathways with respect to their role in proliferation, migration and differentiation of neural stem cells during developmental myelination and remyelination.

We use several techniques to study myelin generation from neural stem cells:

1. Mouse models of diseases: To study remyelination, we induce demyelination in the brain with Lysolecithin injection, Cuprizone diet or use genetically modified mice responsive to Diphtheria toxin. We also use genetic models recapitulating human Trisomy 21 to study Down Syndrome in mice.

3. In vitro neural stem cell culture: We harvest neural stem cells from the ganglionic eminences in embryonic brains and subventricular zone in adult mouse brains and grow them as suspension cultures in a dish. In addition, we manipulate the signaling pathways pharmacologically or genetically to study proliferation and differentiation of neural stem cells in vitro.