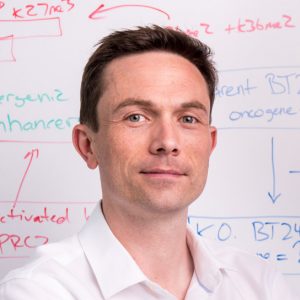 My research program is rooted in the idea that eukaryotic chromatin, the physiologically relevant form of genomes, contains an indexing system that represents a fundamental regulatory mechanism. Covalent modifications to both DNA and histone proteins allow chromatin to act as a dynamic information hub that integrates diverse biochemical stimuli to regulate genomic DNA access and ultimately establish and maintain cellular identity. Aberrant chromatin regulation, as a consequence of mutation or abnormal signaling is associated with many diseases, especially cancer. The identification of oncogenic mutations has led to the emerging view of “driver mutations” in chromatin regulators underlying many human cancers. My research is aimed at defining how changes in chromatin structure aid in the establishment and maintenance of gene expression programs involved in normal development and tumorigenesis.
Tumors of the brain and central nervous system are the leading cause of solid tumor-related death in children. Diffuse midline gliomas are driven by a recurrent Lysine-27-Methionine (K27M) missense mutation in histone H3, and posterior fossa ependymomas are driven by aberrant expression of EZHIP. My group discovered that the K27M histone and EZHIP are potent competitive inhibitors of H3K27 methylation by the gene silencing PRC2 methyltransferase enzyme.
How these genetic alterations promote tumorigenesis is poorly understood, and we seek to elucidate the mechanisms by which K27M and EZHIP misregulate PRC2 to promote tumorigenesis by employing a multi-disciplinary approach that integrates molecular, genomic, and pharmacologic methods.