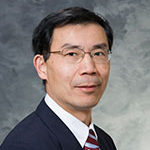 The major research interest in our laboratory is the mechanisms of the JAK-STAT signaling pathway in lymphomagenesis. We previously studied primary mediastinal and Hodgkin lymphoma, both of which share biological and molecular features. One common genetic change in these two cancers is an amplification of chromosome 9p24 region where JAK2 resides. JAK2 and the co-amplified JMJD2C, a gene encoding histone demethylase, cooperate to promote tumor growth. The molecular mechanism of this synergism is histone modifications with H3K9 demethylation by JMJD2C and H3Y41 phosphorylation by JAK2, both of which lead to opening up chromatin structure for gene transcription. Some of JAK2 target genes will be potential molecular targets since their expression is required for cancer cell survival. Recently, we have extended this finding and discovered a similar epigenetic mechanism by the other family member JAK1 in aggressive diffuse large B-cell lymphoma. We will employ a multidisciplinary approach, using biochemistry, RNA interference, DNA microarray, next-generation sequencing, and systems biology methods, to identify JAK1 target genes in this lymphoma.

Our interests also include investigation of the F-box protein FBXO10. Our recent work has characterized FBXO10 as a potential tumor suppressor. As the ubiquitin E3 ligase, FBXO10 targets the anti-apoptotic protein BCL2 for degradation. The gene FBXO10 is infrequently mutated in diffuse large-B cell lymphomas but has reduced expression in a vast majority of these patient samples. We will collaborate with Dr. Michael Gould to dissect FBXO10 function in vivo using FBXO10 knockout murine models established in his lab.